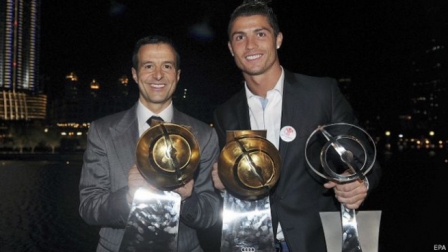 The Star of the Football Club of Real Madrid and a multimillionaire, Cristiano Ronaldo gave his agent Jorge Mendes for his wedding a Greek island as a gift to the happy couple, MEDIA reported.

As the Spanish site Mundo Deportivo, Ronaldo had previously rested on Mykonos, and he knows well the Greek Islands. The island's name was not reported, but its price could reach millions of dollars. At least ten of the Greek Islands that are now for sale may come under this category.

The 49-year-old Jorge Mendez-one of the most successful football agents in the world, he owns the company, which provides the Gestifute agency players.

The wedding of Mendes took place in the elite district of Porto. Mendez and Sandra Barbosa are raising three children and live together since the year of 2005.

According to the information on the Spanish news site ABC, Mendes is one of the richest of the Portuguese, his fortune is estimated up to 100 million euros.