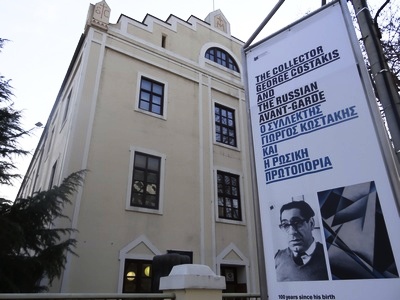 Moni Lazariston, for the first time in Greece will be submitted to the creativity of contemporary Russian artist, "father of conceptual art, Andrei Monastery. The monastery is one of the most important representatives of the Moscow conceptual school, destinations, as developed in the informal art of the USSR in the 1970 's-1980 's. Despite the fact that the name of the Monastery is not as well known as the name of his colleague Ilya Kabakov, conceptual art continued to flourish for a long time, largely Thanks to the philosophy developed and transferred the monastery young Russian artists. The exhibition presented the Russian side within the framework of the cross-year planned for the period from October 19, 2016 on January 14, 2017

In addition, within the framework of the cross-year Greece and Russia, as well as the cooperation of the State Museum of contemporary art with an international exhibition g.Thessaloniki, in Pavilion 6 Hellexpo will be shown pictures of Russian avant-garde from the kostakis collection.