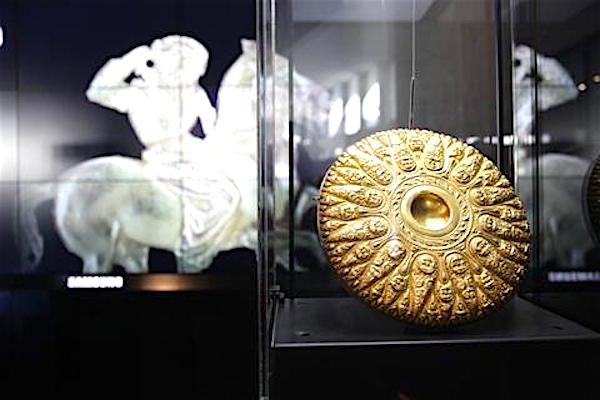 Greece and Russia launched their one-year cultural cooperation with the opening on Friday of a small exhibition of three selected golden objects from the Scythian collection of St. Petersburg’s Hermitage Museum.

The presentation of these objects is a precursor to a larger exhibition which will take place during the year. On its side, Greece will lend Hermitage a marble statue of a 7th century BC archaic Kore from the collections of the Acropolis Museum.

The group of items consists of two vases and a piece of jewelry which were part of a unique Scythian burial set of the 4th century BC, found in 1830 in the royal tomb Kul-Oba, in the Crimea. These masterpieces of metalwork were made by Greek settlers in Crimea, with whom nomadic Scythians had established close trade relations.

“It is a great pleasure for us to inaugurate today officially the Greece-Russia year between two countries with a long history and fraternal relations,” said Baltas, noting that this cooperation worked well for both countries.

“It is a dedicatory year that wants to highlight not only the ties with the past and the friendship of the two peoples but also to respond to the crisis facing Greece, Russia and the surrounding region,” he added.

On his side, Prikhodko said that the two countries count thousands of years of political, religious, historical and cultural ties. “Since ancient times, Greece was a source of scientific knowledge for Russia,” he said.

“We believe the Greece-Russia year will contribute to the effective strengthening of relations between our countries and will boost trade and economic cooperation which is not going through its best phase,” he added.

Commenting on the exhibition, the president of the Acropolis Museum Dimitris Pandermalis welcomed the event saying it is a testament to the close relations between Greeks and Scythians.

“There could not be a better selection of items, which are the ambassadors of this year of friendship; these three articles which show in the most vivid way the close relationship between the Greeks and the Scythians,” he said.

The Director of the Hermitage Museum, Mikhail Piotrovski described the items as “the pride” of the museum. “It is a great pleasure and honor for the Hermitage Museum to present our exhibits in one of the most modern and large museums in the world. The exhibits are the pride of the Hermitage and Russian archeology. They are the best exhibits and truly reflect the very good relations between Greece and Russia,” he said, adding that Russians often say the country is part of the European culture thanks to Russia’s Greek roots.

He also said that officials at Hermitage are already preparing the area where the Kore will be exhibited, noting that this will be followed by a Byzantine exhibition, which will be a joint collaboration between the two museums.

The event was attended by State Minister for Coordinating Government Operations Alekos Flambouraris, Alternate Education Minister for Research and Innovation Kostas Fotakis, Deputy Foreign Minister Yiannis Amanatidis, as well as other officials, from the foreign ministry and the Russian embassy in Greece.

The three objects will be exhibited at the ground floor of the Acropolis Museum from March 11 until October 2, 2016.