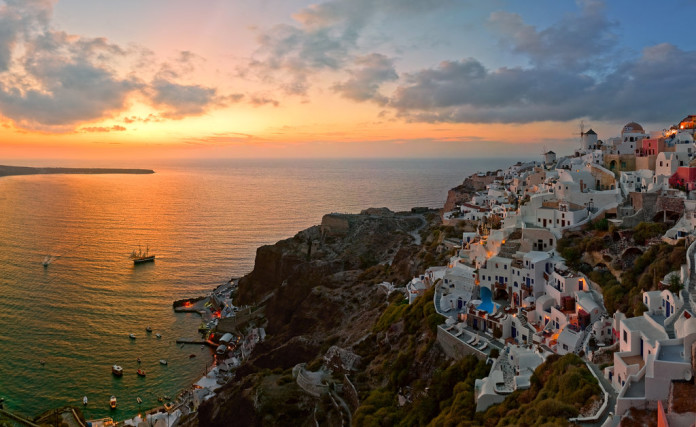 The world’s leading travel magazine Conde Nast Traveller presented a list of the most beautiful places in Europe. According to Conde Nast Traveller, Europe may be one of the smaller continents, but what it lacks in size, it makes up for in scenery: breathtaking alpine views, fabulous fields of lavender and vine, sublime art and architecture.

Porto Katsiki Beach on Lefkada Island and Oia Santorini (pictured above) in Greece are listed among the most beautiful places in Europe.

Porto Katsiki Beach is considered to be one of the island’s major attractions. Situated 40 km southwest of Lefkada Town, the beach is surrounded by fascinating hills which make it accessible only by 80 steep steps descending along the cliff. Porto Katsiki owes its fame to its crystal clear blue sea and golden sandy beach.

Oia is a traditional, picturesque village in Santorini. Situated on top of an impressive cliff, it offers a spectacular view over the volcano. It is known throughout the world for its exquisite sunset. Oia is characterized by charming houses in narrow streets, blue domed churches, sun-bathed verandas. Oia has a small port, Ammoudi, which can be reached by a set of 300 steps leading down. There, small boats can take you opposite, to the island of Thirassia.

Other places also listed as the most beautiful in Europe are Tuscany in Italy, Azure Window in Malta, Lapland in Finland, Lucerne in Switzerland, Algarve in Portugal, to name just a few.