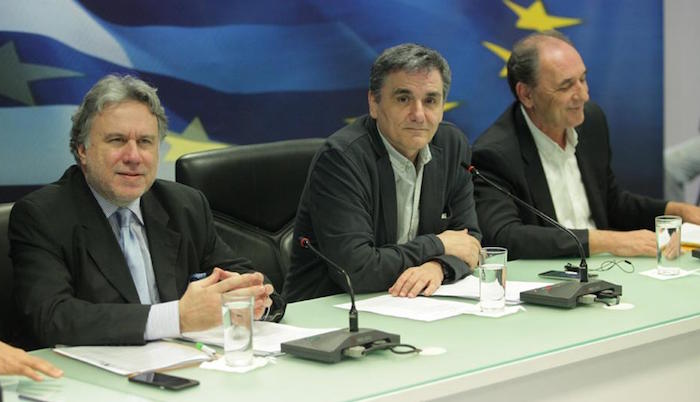 The goal is for both plans to be voted with a regular procedure by the end of the month, according to Tsakalotos, who said that “the Greek government, as the majority, will decide how the memorandum goals will be accomplished.”

In addition, he expressed his estimation that it is possible for the agreement with the institutions to be validated in a Eurogroup emergency meeting on April 25 or 26.

“Yesterday, we became aware that even though we are very close to big issues, there are many more that we couldn’t solve in 10-15 hours,” Tsakalotos supported. “We all discussed that we will proceed and decide if there is the restriction of the IMF meeting to interrupt and continue on Monday in order to achieve an agreement in the Eurogroup on April 22,” he added. “However, given that the April 22 Eurogroup is informal, it is most likely for an emergency Eurogroup on Monday or Tuesday,” he said. Tsakalotos also highlighted that “we respect the differences of others, we hear their estimations on the measures, but as the dominant country we maintain the right to decide how to achieve the goals.”

Giorgos Katrougalos expressed his certainty that if there was additional time for negotiation, then “we would have reached a final agreement.”

George Stathakis expressed his optimism for an agreement on the non-performing loans. Stathakis said that there are distances with the creditors‘ representatives on the NPLs, but estimated that in the time to come, there will be a convergence of opinions in order to achieve an agreement.