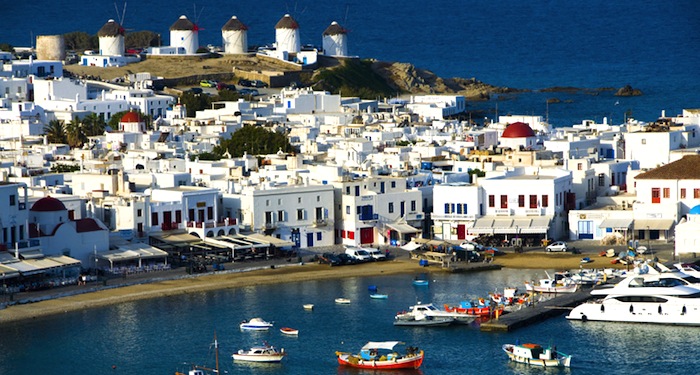 While the rest of Greece is amid social and financial turmoil, and while several ports and islands live under the fear of this year’s questionable tourist season, there is one specific location in Greece that seems to be secluded from the harsh reality: the island of Mykonos.

The island of Mykonos appears to have a relentless course of development, since over the past twenty years a growing number of investments — in bars, restaurants, hotels, shops, beaches and all kinds of services — are made by both Greek and foreign investors targeting both high-class and middle-class audiences. Even though in recent years the traffic of Greek tourists has decreased in comparison to the international visitors due to the financial crisis, people don’t seem bothered by the over-priced services, as long as they can have a taste of “glamour” on this island of winds; this is the ground in which investors find the opportunity to flourish.

All across Greece people are struggling to buy or rent a business space at a price that will benefit both parties, yet on the contrary, there is always the constant problem of unavailable free spaces in Mykonos and as soon as something opens up, potential buyers or renters throw themselves into a high-bidding battle. According to Proto Thema newspaper, businessmen have to pay between 6,000 to 9,000 euro in order to rent a 50 square meter space, whereas the price to buy such a space costs about 100,000 to 300,000 euros. In addition, if someone is interested in renting a one-bedroom house with a small living room, he/she is looking to pay in the ballpark of 6,000 to 10,000 euros per season.

On Lia beach on the southern part of Mykonos, Italian businessman, former owner of Sale e Pepe restaurant and Formula 1 event organizer Massimo Chirillo, along with one other Italian businessman and the fashion designer Elisabetta Franchi, spent one million euro on a property that belongs to the Church which will turn into a restaurant/beach-club that will feature awarded Italian chefs, according to Proto Thema.

In addition, the same report said that last Thursday, offers opened up on the purchase of the “Leto” hotel in Chora, Mykonos, starting off at 8 million euros. Even the hotel is relatively small as it only has 21 rooms, its strategic location at the entrance of the city on the port attracted 19 bidders.

Lastly on the Ai-Yannis beach, the “Bill and Koo Coast” hotel will open, which will be offering 19 suites. Proto Thema reported that the cost of the investment is over 2 million euros, while a reservation could run for about 600 euros per night.