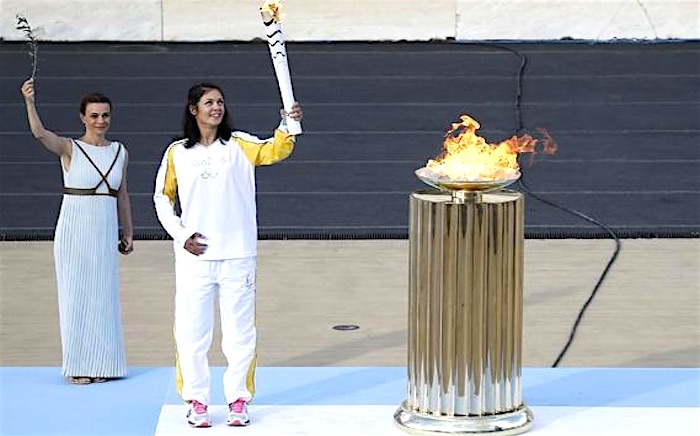 Several minutes after 5 pm, the ceremony of the Greek leg of the Relay ended at the Panathinaic stadium in Athens, where the Hellenic Olympic Committee passed over the Flame to the Rio Games organizers.

The ceremony took place in the presence of the president of Democracy Prokopis Pavlopoulos, the deputy Minister of Athletics Stavros Kontonis and the head of the Hellenic Olympic Committee Spyros Kapralos.

The Flame was brought in the Panathinaic Stadium in Kalimarmaro by rowing champion katerina Nicolaidou.

The ceremony started by the High Priestess Katerina Lehou and the priestesses.

The Rio 2016 committee was represented by Carlos Nuzman, who received the Olympic Flame from the Hellenic Olympic Committee Spyros Kapralos.

The journey of the flame around Greece lasted for seven days, while the torch rally will continue towards Brazil until August 5th, when the flame will enter the stadium to officially commence the summer Olympic Games.

After the ceremony of the Flame, festivities followed with Sakis Rouvas, the Philharmonic Orchestra of Athens, the Children’s Choir of EOS and a Brazilian Band.