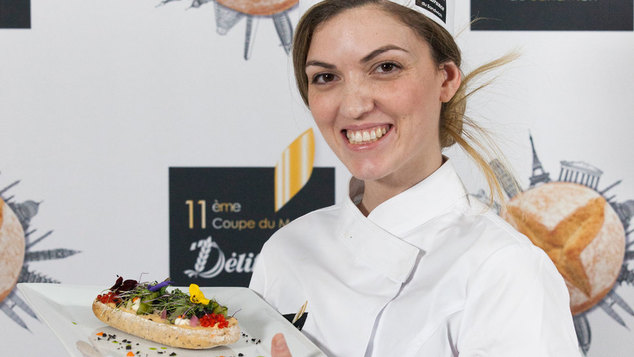 The Greek chef took the traditional ‘fasolada’ (bean soup) – supposedly Greece’s national dish for the poor – and twisted it beyond recognition, creating a mouth-watering sandwich that impressed the jury of the 11th World Contest Sandwich Delifrance.

The competition took place during the Sandwich & Snack Show in Paris. The 10 contestants had to create a sandwich based on an emblematic dish of their homeland. The jury selected three women (from Peru, Greece, Turkey) in the Top 3 and congratulated the other contestants for their bold innovations that impressed the judges.

The second best sandwich in the world for this year is Greek. It is made with Ciabattina Delifrance bread with sesame seeds, sunflower, flax and quinoa, and combines ideally the bean soup puree, celery, smoked trout, cherry tomatoes and carrot coulis.