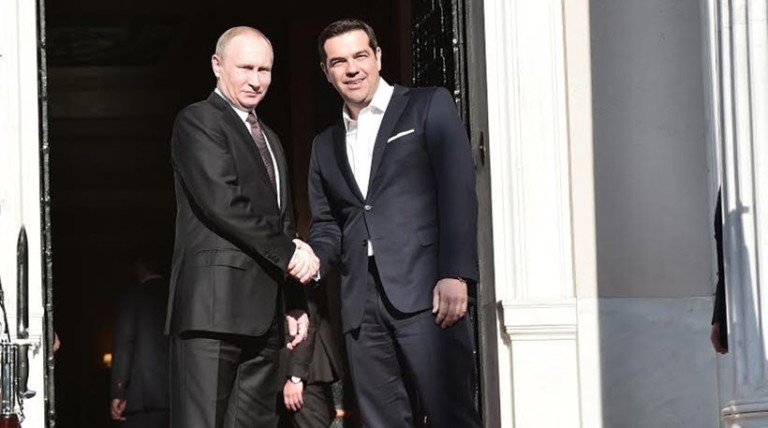 Russian President Vladimir Putin visited Greece on Friday on his first visit to a European Union country this year. He arrived for his two-day visit, 1.5 hours later than planned at 5 p.m., under heavy security. Greeted with military honors by Defense Minister Panos Kammenos, he met briefly with President Prokopis Pavlopoulos before being welcomed by Prime Minister Alexis Tsipras at Maximos Mansion.

Speaking in front of the cameras, Tsipras confirmed the cordial ties shared by Greeks and Russians. He said that “strengthening relations with Russia constitutes a strategic choice which is dictated both by the historically close, cultural and political ties, as well as the possibilities opening in front of us and the possibilities of strengthening stability in the region.”

Tsipras said that Putin’s visit comes at a time when Greece is turning a new leaf at a time when uncertainty is ending and the future is looked forward to with greater optimism.

The Russian President said the high-level meetings are in the framework of Greek-Russian year. He said that while there are many problems and difficult circumstances there are still “good prospects” for economic cooperation. “We must transform the good relations of our peoples to tangible economic results,” he said.

Putin said the cooperation is not limited to energy, but also includes high technology, infrastructure and mutual investments that will be discussed later today.”

Earlier, Putin had met with Greek President Prokopis Pavlopoulos. He emphasized his belief in the importance of the common moral values shared by Russia and Greece. Putin thanked the Greek leadership, the Greek Orthodox Church and Greek Orthodox Patriarch Bartholomew I for their support of his trip to Mount Athos where the millennium of Russian monastic presence will be celebrated.