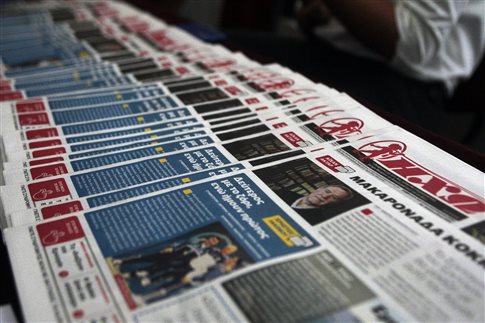 After forty successful years of circulation in Istanbul, Diaspora newspaper Echo will now have an edition published in Greece.

In a reception held at the General Secretariat of Information and Communication, General Secretary Lefteris Kretsos hosted Diaspora Greeks, journalists and clergymen for the first copy of Echo’s Greek edition was presented to the public.

The reception started with the screening of a greeting by Ecumenical Patriarch Bartholomew, who said that the Greek version of the newspaper will take the pulse of Imvros and Tenedos, and the voice of Istanbul to Orthodox Greece, “emitting loud and clear the message of the presence of Orthodoxy.”

The general secretary commented on the move of the publishers to bring the newspaper to Greece during a time when the economy is in recession.

Echo was established in Istanbul in 1977 by Charalambos Rombopoulos, providing daily news about the homeland to Diaspora Greeks of Istanbul. Today it is published by Andreas Rombopoulos, son of the newspaper’s founder.

“Echo, which was awarded the Botsis Foundation prize in 2009, comes to Greece at a time when once the logic dictates otherwise. The ship sails by a collective effort and goes forward,” Rombopoulos said during the presentation.

The newspaper’s editorial team will consist of academics, professors, teachers and intellectuals, and it will be providing a lot of information and editorials on Greek-Turkish affairs and Cyprus.