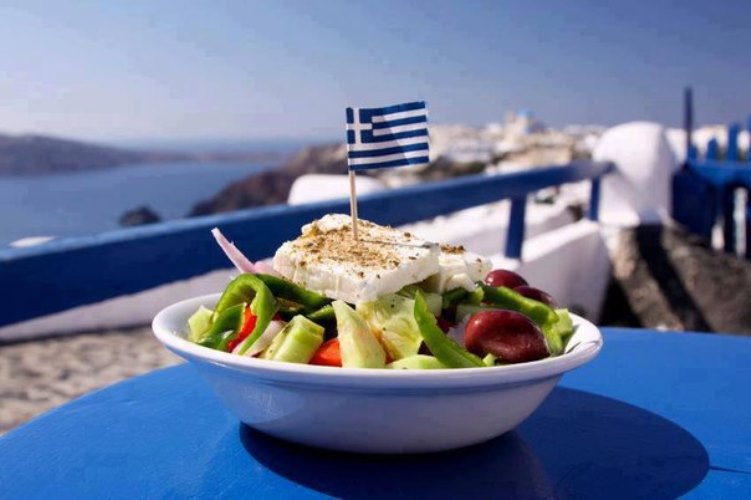 Traditional Greek cuisine is typically Mediterranean and has a lot in common with the cuisine of southern France and Italy. But it also has its own characteristics.

The most characteristic and ancient element of Greek food is olive oil, which is present in almost all dishes. The basic types of grain in Greece are wheat and barley, which are increasingly used in recent years. The most popular vegetables: tomatoes, eggplants, green beans, okras, peppers and onions. Honey in Greece is mainly flower honey - from the nectar of fruit and citrus trees. Thyme and pine honey are also popular. Mastic is grown on the island of Chios ,situated in the Aegean Sea.

In Greek cuisine herbs and spices are much more frequently used than in other Mediterranean cuisines. Usually these are oregano, spearmint, garlic and bay leaves. Other popular spices are basil, thyme, and dill seeds. In many Greek recipes, especially in the northern parts of the country, "sweet" spices ,such as cinnamon and cloves ,are used in meat recipes. Other popular ingredients are lamb, feta cheese , grape leaves and zucchini. In desserts honey and walnut prevail.

A special Greek pride is cheese. In Greece, there are more than 50 varieties of cheese (a special recipe in each region). Cheese consumption in Greece is more than 25 kg per person per year. The most popular variety is called feta: it is used in the preparation of the famous Greek salad. In Greece, this salad is called "horiatiki" (village salad).

Meat is also popular in Greece. Pork, sheep and goat meat is preferred.

Typical Greek food is simple, colourful and flavoured. Many dishes are influenced by Greek history. I Greece you can try the whole kaleidoscope of Greek dishes!