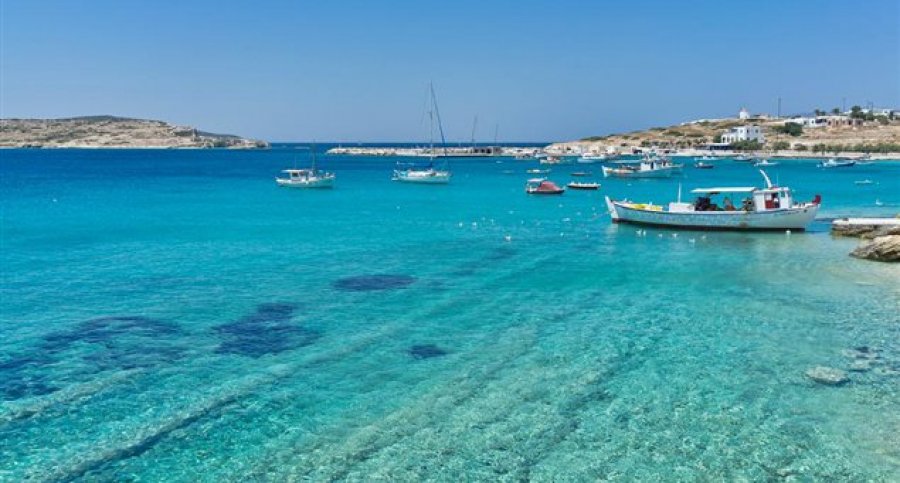 Antiparos
Antiparos is a small Greek island in the southern Aegean, in the central Cyclades. It is only a stone’s throw from Paros which is where you can access the ferry to cross to the quaint island. One natural wonder that has been enchanting visitors to the island for centuries is the Cave of Antiparos which is believed to be Europe’s oldest cave. In fact, it is believed that the very first visitor to the cave was Archilochus, a lyrical poet from Paros, who lived from 728-650 BC! The entrance to the cave is guarded by a small 18th-century church which is also worth checking out, called Agios Ioannis Spiliotis (Saint John of the Cave).

There are wonderful, relaxing beaches on the island as well as a typical small island sense of hospitality — meaning you will find quaint tavernas and restaurants where you feel like family while eating traditional food.

Now that you know how to get there, here is what you will find on Pano Koufinisi. This is the perfect island for relaxing, taking long walks along the beach or taking a dip in the sparkling blue sea.

There are tavernas and shops in Chora where you will also find some accommodations if you wish to make your trip to this small island more than just a day trip.

Serifos is a small island of about 75 square kilometers and is located in the Cyclades. You will find this hidden treasure which is often overlooked by tourists between the island of Kythnos and Sifnos. It is the ideal Greek island to visit if you don’t want to be surrounded by tourists — mostly due to the fact that no one knows it even exists! This island is accessible from a ferry at the port of Piraeus and other islands of the Cyclades group.

As soon as you arrive on Serifos at the port of Livadi you will see beautiful sandy beaches against an impressive view of the capital Serifos, or Chora, dotted with white houses on the slopes of the hill. The island is almost in the shape of a circle and boasts 74 beaches all around its shorelines where you will find everything from water sports and secluded natural coves to relaxing beaches. A lot of the beaches have tavernas nearby them, so you can always relax with a home cooked traditional Greek meal for lunch, dinner or both!