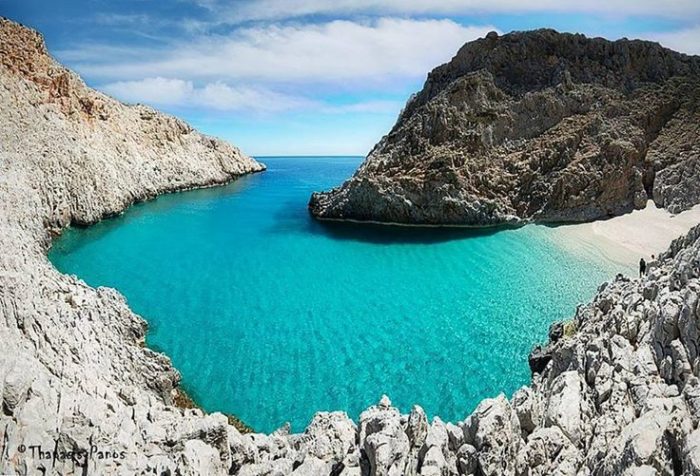 The largest of the Greek islands has proved to be a paradise for those visitors seeking sunshine, beaches, and culture. Among the best places to see, the cities of Chania, Rethymno and its the capital, Heraklion. Don’t forget Crete’s impressive gastronomy and outstanding wines.

The most glamorous Greek island has more to offer than the beautiful towns of Fira and Oia. A breathtaking landscape made of black, white and red beaches combines with archaeological sites and stunning views in almost every corner of the island.

Corfu, in the Ionian sea, is another of the bigger islands of Greece capable of offering endless options to its visitor. Among the most beautiful beaches, it is possible to explore Paleokastritsa as well as the impressive shore of the Canal D’Amour.

Cosmopolitan and over the lines, Mykonos can also be the perfect place where to take in some of the authentic Cycladic atmosphere made of whitewashed buildings, windmills, and blue-domed churches. However, the most popular of the Aegean islands attracts an eclectic, sometimes upscale crowd that thrives on its stylish nightlife and parties.

Another jewel of the Ionian, Zakynthos shines with its deep blue shores and soft, clear sand. The largest of the Ionian Islands has a perfectly beautiful landscape boasting olive groves and vineyards.

The capital city of the country is probably among the best city-break destinations in Europe. It has one of the richest cultural panoramas of the world as well as a unique nightlife. Athens is also a gate for nearby islands and coastal villages worth a visit.

Legendary shades of blue put color to the seas surrounding the island of Kephalonia, home to Odysseus, the legendary king in Homer’s The Odyssey. Unique caves and beach coves combine with a lush green nature, that makes visitors fall in love with the island.

The second island of the Dodecanese after Rhodes as far as population is concerned, Kos represents a paradise for beach-goers. The seaside village of Kardamena is popular among young travelers due to its large selection of bars and nightclubs.

This unique green island is a holistic proposal made of adventure, beaches, gastronomy, and culture. The largest of the Cyclades welcomes visitors with one of the most striking remains of the past, the stone gateway known as the Portara, current symbol of the island.