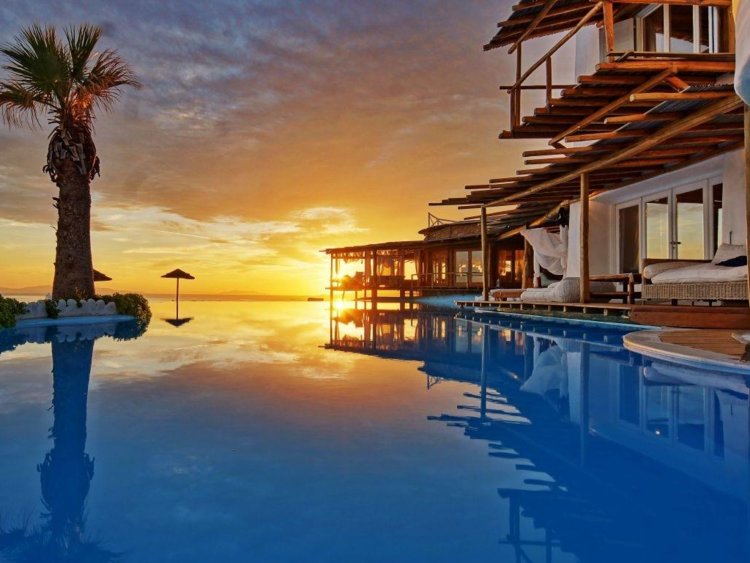 If you have ever fantasized about what it would be like to have a high-rolling, one-week vacation on the Greek island of Mykonos with $1 million (USD) burning a hole on your pocket, look no further.

Recently Australia’s Business Insider offered a glimpse of the good life to its readers, showing how easy it is to blow through $1 million in a mere 7 nights, 8 days vacation on the famous island of Mykonos.

The island is known for its luxury and many celebrities, as well as the rich and famous who frequently vacation on the island. Let’s look at some of the overly lavish things you can do on the island to pass the time and spend $1 million.

Amir Benesh, CEO of LVH Global, a luxury home-rental service that rents mansions, villas, and yachts to the world’s wealthiest travelers explained to Business Insider what extravagance one can experience on a 1-week vacation, for a group of 14 people during the month of July (prices are approximate).

Day 1: First off, you would be arriving on the island in a private jet, of course. An example given by Benesh was traveling to Mykonos via New York City on a private jet costing approximately $287,920.00 round trip.

Next, the accommodations, a luxury villa such as Villa Cheyenne, Villa Ariana, or Villa Sara, will run the group of 14 around $213,500.00 for the seven nights.

However, with all of the amenities at the villa, (For example: Villa Sara features an ocean view, helipad, fitness center, eight bars, jacuzzi, and 12 Aegan cocooning areas. With additional extra services including a villa staff, VIP concierge, security, villa DJ, food, alcohol, and staff tip) the cost of stay for the group can increase up to $345,016.00.

Day 2: Next, on day 2 it is time to hit the beach, millionare-style. Benesh suggests trying out the beach club Scorpios, which serves organic eats with seaside views that for a group of 14 people would run about $146,400.00 for six tables.

In the evening, dining at Interni Mykonos, an open-air dining room off of a secret passageway that transforms into a dance lounge at 2 am, will cost the group $122,000.00 for five tables.

Day 3: The group can pay a visit to the famous Mykonos Town on day 3. Their transportation, luxury van, will cost upwards of $21,350.00. While in Mykonos town, the group can take a tour of the sacred island of Delos, known in Greek mythology as the birth place of the Greek gods Apollo and Artemis.

Just ten minutes south at Ornos, the group can learn how to kitesurf at Kite Mykonos. And as if the day isn’t fun-filled enough at this point, they have the evening to look forward to.
Once the sun sets, the group can head over to Cava Paradiso, a nightclub on a rocky bluff overlooking Paradise Beach. With an oversized swimming pool and a super-disco, it attracts celebrities and well-known DJs. The cost for clubbing – $54,900.00 for three tables.
Day 4: After the long day and staying up all night partying, the group can opt to take advantage of the amenities the villa has to offer at the on site spa. This will cost about $12,810.00.
Relaxing by the pool and enjoying a private sunset from their villa balcony is next on the list, followed by dinner.
Ling Ling Hakkasan in Mykonos Town, offers Michelin-star modern Cantonese food and world-class mixology, and will cost the group some $122,000.00 for five tables.

Day 5: While in Greece, the group doesn’t want to miss out on Athens and the sites, so they rent three helicopters and travel from Mykonos to Athens, costing $21,594.00 round trip.

Day 6: Checking out the beautiful blue waters of Greece is taken to a whole new level with this group of tourists, as they opt to cruise the Mediterranean via two luxury yacht rentals complete with a full yacht crew costing about $48,800.00.

The day’s activities are complete with a stop at Paradise Beach for scuba diving with Mykonos Diving Center, a five-star dive resort.

And on this, their final night, the group goes to Guzel to dine. Located on the Mykonos waterfront, it offers sunset views, Mykonian elite, and a vibrant atmosphere that will cost $54,900.00 for three tables.
Day 7 : The action isn’t over yet! The group can go on one last excursion, spending the morning horseback riding. Total excursions throughout the trip can cost around $6,100.00.
Lunch takes place among the up-scale and fashionable locals and a hot glitterati scene at Nammos in Psarou Beach costing $146,400.00 for six tables.
Day 8: On the last day, it is time for the group to jet back to New York on the private jet. In total, the cost of this luxurious trip to Mykonos for 14 people comes in at $1.3 million.
Source: greece.greekreporter.com