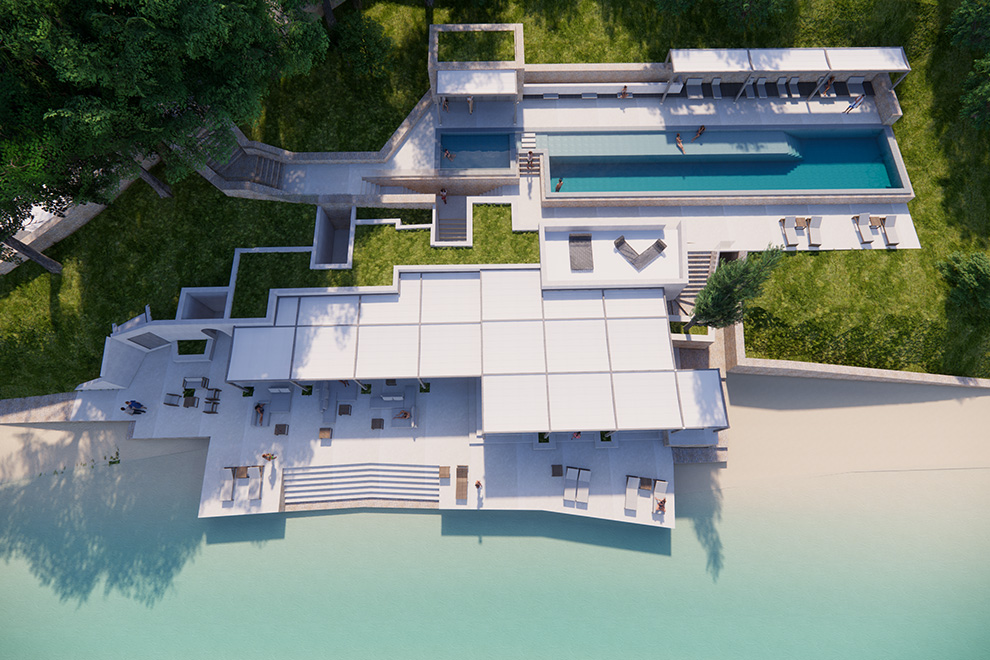 Dmitry Rybolovlev, businessman and billionaire who is included in top 20 richest individuals of Russia, continues to build an elite resort VIP Exclusive Club in the Greek Island Scorpios. Forbes magazine published the first photographs of this project, which were uploaded by a businessman’s representative.

According to the plan, the compound includes a five-star hotel with 48 beds (9420 m2), pools, amphitheater, wellness center and sport installations. The construction of a farm, poultry farm, orchard, stable, vineyard and an artificial lake was also agreed. On the east side of the island there are several decaying residencies. According to Business Insider, the former owner of the Scorpios island, Aristoteles Onasis lived there previously. Amongst these buildings there is the famous “Pink House” – property of his second wife Jacqueline (widow of John F. Kennedy, former first lady of the United States of America). Rybolovlev intends to fully reconstruct all shabby buildings as well as renovate all the island infrastructure. The current port will be expanded to accommodate large boats. The preparatory procedures initiated during 2020. The VIP exclusive club resort is expected to be ready until summer 2024.

Greek billionaire Aristoteles Onasis purchased Scorpios Island on 1963. On 1988 the businessman’s daughter, Christina, died and then the island was abandoned. Dmitry Rybolovlev purchased the island on 2013 from Onasis’ granddaughter Athena. The price was set at 153 million dollars and included not only Scorpios Island but also the neighboring small island Sparti. Typically, the buyer was not Rybolovlev himself, but one f the companies connected to his daughter, Ekaterina. Dmitry prefers this method following the divorce with his former wife Elena.

The billionaire’s family uses the island for exclusively private use. On 2014 Ekaterina celebrated her 25th birthday on the island, and one year later her marriage.

On December 2020, Greek authorities approved the construction of the VIP Exclusive Club in Scorpios Island. According to preliminary estimations, this project may create 130 new job positions and the investments will amount to approximately 200 million dollars. Rybolovlev family intends to use the island for themselves, but only periodically. The rest of the year they will rent it as a whole. The specific rental cost has not been shaped yet, but Rybolovlev’s representatives mentioned that it will definitely exceed 1 million euro per week.